I've talked about VR here right after I had my amazing first experience with the Vive. Since then I've tried the different VR platforms many times and in different settings. HTC Vive is still the best experience I've had (especialy compared to the Oculus Rift) but I haven't been able to get one myself. It's too pricey and I do not own a gaming desktop PC. The best way to play the Vive has been to travel to "cheap" countries and find Virtual Reality playshops where you can play for hours in exchange for a bit of money. There is no doubt that these are going to be the cybercafes of the future.

I've also tried playstation VR, which was pretty disapointing as a competitor to the Vive and the Rift. At some point I got a Google cardboard which was interesting for the first hour but quickly lost interest. Not too long ago I've also tried the Golem VR attraction in Prague's Hamley and it kinda sucked. They give you a backpack with a computer in it so that you can walk around without being tied to some cable. They have a large playfield where you can roam freely while taking part in a boring adventure. You can see your hands (via the motion leap) but the whole experience is dull and ends pretty quickly.

Anyway, the Oculus Go was released not too long ago as a massive consumer product: it's cheaper (~200$), it has embedded microphone and headphones, it's slick as fuck, it's comfortable, and it has the best lenses on the market. I was a bit skeptical at first, because of my experience with the cardboard, so I bought one for my parents.

I finally tried it, and let me say that this is the revolution we've all been waiting for. This is the device that everyone should buy. I still don't own a Vive or a Rift, but this thing is so practical that I'm pretty sure I would use it more than the bigger headsets if I had both. It just works and is good enough for a lot of experiences and games. No setup, you place it on your head whenever you want to play and then you just play.

I had a ton of varied experience since then, but my favorite one is Catan. You probably know the board game, well they made it for Virtual Reality as well! Rather than a thousand words, here's a video of what it looks like:

I happened to click on the join an online game button, which instantly propulsed me into a room with two other people. They seemed to have been there for a while and where already chatting. One was a wizard and the other one was a mask. Once I joined they greeted me and explained to me how I could choose a different avatar. I chose a sheep head and we played for 40 minutes and even shook hands at the end. It was magical. I did not expect VR to be such a big social platform. You are propulsed into games with people and are forced to speak to them. No "mute microphone" or no indication that you're going to be confronted to real people. Compared to your typical PC game which is a pretty quiet and asocial experience, it's weird. I loved it. 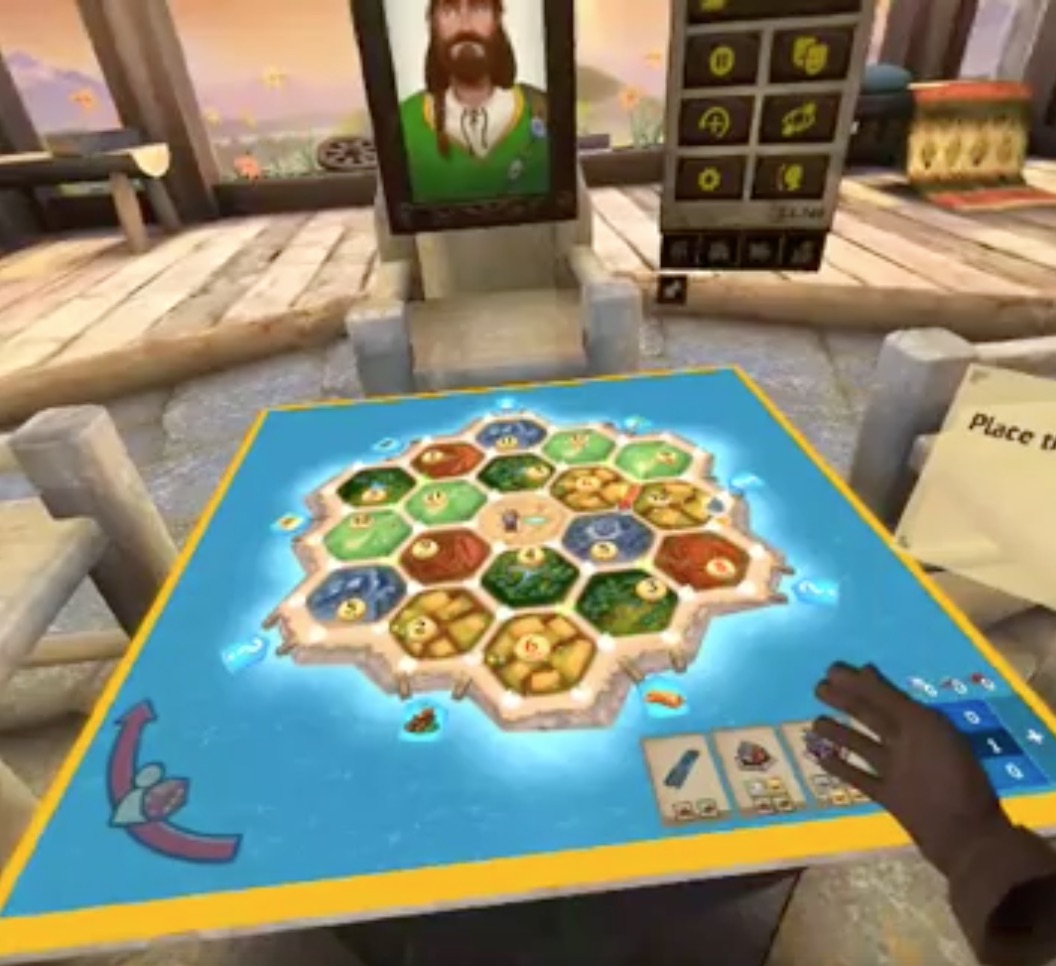